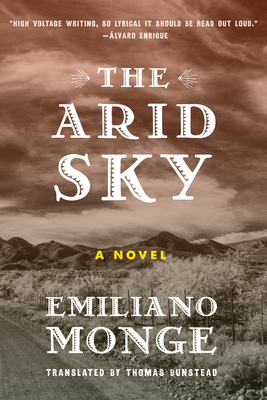 By Emiliano Monge, Thomas Bunstead (Translated by)
$16.99
In Stock In Store

Imagine a cross between Cormac McCarthy's work and "Breaking Bad" (but remove the show's pitch-black humor)-- Monge's stark, brutal tale of violence and regret in the unforgiving Mexican desert manages to be both lyrical and deeply visceral. --Todd

“This dark, sprawling novel is the English language debut of Emiliano Monge, a Mexican writer who is often compared to the US literary superstar Cormac McCarthy. Written in a tone that evokes McCarthy’s unrelenting classic Blood Meridian, the novel tells the story of Germán Alcántara Carnero, a dangerous campesino fighting to survive in rural 20th century Mexico, and also a metaphor for the spiraling violence of contemporary Mexican society.” —Culture Trip

Set on a desolate, unnamed mesa, Emiliano Monge’s The Arid Sky distills the essence of a Latin America ruthlessly hollowed out by uncontainable violence. This is an unsparing yet magnificent land, whose only constants are loneliness, hatred, loyalty, and the struggle to return some small measure of meaning to life.

Thundering and inventive, The Arid Sky narrates the signature moments in the life of Germán Alcantara Carnero: a man who is both exaltedly, viscerally real and is an ageless, nameless being capable of embodying entire eras, cultures, and conflicts. Monge’s roadmap—an escape across borders, the disappearance of a young girl, the confrontation between a father and his son, the birth of a sick child, and murder—takes readers on a journey to the core of humankind that posits a challenge of the kind only great literature can pose.

Emiliano Monge (Mexico City, 1978) studied Political Science at the Universidad Nacional Autónoma de México, where he also taught until his move to Barcelona, where he currently resides. Though he has worked as a book and magazine editor, at present, he fully dedicates his time to this writing. His first short story collection, Arrastrar esa sombra, was published in 2008, followed by the novel Morirse de memoria; both were finalists for the Antonin Artaud award. With a wide array of non-fiction essays, reportage, and book reviews, he has been an ongoing contributor to the Spanish newspaper El País, the Mexican newspaper Reforma, and prestigious magazines such as Letras Libres and Gatopardo. He was the two-time recipient of the Conaculta award Fondo Nacional para la Cultura y las Artes, and is now a member of the “Orden del Finnegans”, a group of Spanish writers that gather annually on Bloomsday in Dublin in honour of Joyce’s Ulysses. In 2011, the Guadalajara International Book Fair chose him as one of the top 25 best-kept secrets in contemporary Latin American literature, and in 2013 was awarded the Corte Inglés prize “Otros ámbitos, otras voces”. Last but not least, he was selected for “México20”, a list of twenty important young Mexican authors (chosen by The British Council, the FIL, Hay Festival, Conaculta) who will be the guests of honour at the upcoming London Book Fair, with their work featured in an anthology to be published by Pushkin Press.

Thomas Bunstead is a writer and translator based in East Sussex, England. He has translated some of the leading Spanish-language writers working today, including Agustín Fernández Mallo, Enrique Vila-Matas and Juan Villoro, and his own writing has appeared in publications such as The Paris Review, The White Review and The Times Literary Supplement. He is an editor at the literary translation journal In Other Words. Find him on Twitter: @thom_bunn

“The novel thrives on a persistent feeling of universality, a sense that Germán’s scrambled life is a stand-in for many others. Monge routinely refers to him as “ourman,” the better to cast him as symbol for countless other similar violent actors, villains who want to think of themselves as heroes. But the name also forces us to claim him as part of history that can’t be wiped away.”
— Mark Athitakis

“High-voltage writing, so lyrical it should be read out loud.”
— Álvaro Enrigue, author of Sudden Death

“A blood-soaked yet lyrical story of regrets, memories, and the faint possibility of redemption, set in a parched Mexican mesa. Monge's first novel to be translated into English will open one of Mexico's most talented young writers to a new audience... Monge's sentences reflect the meandering structure, dizzying the reader with complexity and beauty….this style reflects Monge's overall message about the morphing shape of memories and how they all combine to form a person….Monge's novel is a brutal gem of a book concerned with the burdens of the past.”
— Kirkus Reviews

“Dizzyingly structured, Monge’s novel blends the visceral with the philosophical in a host of unexpected ways. Narration frequently reminds the reader of the nature of storytelling—and calls attention to the somewhat stylized manner in which the story of one man’s life is recounted here. Under other conditions, this could read like an overly self-aware device, but in the service of recounting a turbulent, violent life, the style ends up clicking surprisingly well. It’s a risky literary decision that pays off nicely.”
— Tobias Carroll

“As translated by Thomas Bunstead, Monge’s prose is crisp, and his nonlinear narration creates a heightened sense of unpredictability. . . .Monge is contending with universal themes. His depiction of unchecked power is a warning, one that will always be worth heeding.”
— Kevin Canfield

“This dark, sprawling novel is the English language debut of Emiliano Monge, a Mexican writer who is often compared to the US literary superstar Cormac McCarthy. Written in a tone that evokes McCarthy’s unrelenting classic Blood Meridian, the novel tells the story of Germán Alcántara Carnero, a dangerous campesino fighting to survive in rural 20th century Mexico, and also a metaphor for the spiraling violence of contemporary Mexican society. The novel’s opening gambit: “This is the story of a man who, unbeknownst to him, was his century,” is without doubt one for the ages.”
— Stephen Woodman

“Monge shows a violence-filled life, from his violent conception to his violent death and lots in-between, an indication of what life has been and is in Mexico.”
— The Modern Novel

“Rarely can we witness literature like this.”
— Miguel Ángel Ángeles