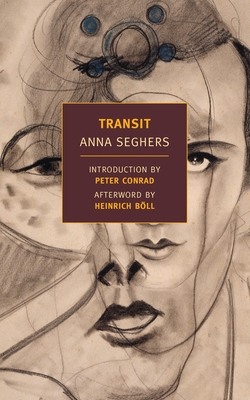 By Anna Seghers, Peter Conrad (Introduction by), Margot Bettauer Dembo (Translated by), Heinrich Boll (Afterword by)
$15.95
In Stock In Store

Rarely has the adjective, Kafkaesque, been more fitting: Seghers's tense, nervy WWII-era literary thriller captures the predicaments and plight of the exiled with a thick air of confusion and existential dread. It's a brilliantly-rendered survey of the human collateral damage of war and conflict, and remains as relevant now as ever. --Todd

Anna Seghers’s Transit is an existential, political, literary thriller that explores the agonies of boredom, the vitality of storytelling, and the plight of the exile with extraordinary compassion and insight.

Having escaped from a Nazi concentration camp in Germany in 1937, and later a camp in Rouen, the nameless twenty-seven-year-old German narrator of Seghers’s multilayered masterpiece ends up in the dusty seaport of Marseille. Along the way he is asked to deliver a letter to a man named Weidel in Paris and discovers Weidel has committed suicide, leaving behind a suitcase containing letters and the manuscript of a novel. As he makes his way to Marseille to find Weidel’s widow, the narrator assumes the identity of a refugee named Seidler, though the authorities think he is really Weidel. There in the giant waiting room of Marseille, the narrator converses with the refugees, listening to their stories over pizza and wine, while also gradually piecing together the story of Weidel, whose manuscript has shattered the narrator’s “deathly boredom,” bringing him to a deeper awareness of the transitory world the refugees inhabit as they wait and wait for that most precious of possessions: transit papers.

Anna Seghers (née Netty Reiling; 1900–1983) was born in Mainz, Germany, into an upper-middle-class Jewish family. She was a sickly and introverted child by her own account, but became an intellectually curious student, eventually earning a doctorate in art history at the University of Heidelberg in 1924; her first story, written under the name Antje Seghers, was published in the same year. In 1925 she married a Hungarian immigrant economist and began her writing career in earnest. By 1929 Seghers had joined the Communist Party, given birth to her first child, and received the Kleist Prize for her first novel, The Revolt of the Fisherman. Having settled in France in 1933, Seghers was forced to flee again after the 1940 Nazi invasion. With the aid of Varian Fry, Seghers, her husband, and two children sailed from Marseille to Mexico on a ship that included among its passengers Victor Serge, André Breton, and Claude Lévi-Strauss. After the war she moved to East Berlin, where she became an emblematic figure of East German letters, actively championing the work of younger writers from her position as president of the Writers Union and publishing at a steady pace. Among Seghers’s internationally regarded works are The Seventh Cross (1939; adapted for film in 1944 by MGM), one of the only World War II–era depictions of Nazi concentration camps; the novella Excursion of the Dead Girls (1945); The Dead Stay Young (1949); and the story collection Benito’s Blue (1973).

Margot Bettauer Dembo has translated works by Judith Hermann, Robert Gernhardt, Joachim Fest, Ödön von Horváth, Feridun Zaimoglu, and Hermann Kant, among others. She was awarded the Goethe-Institut/Berlin Translator’s Prize in 1994 and the Helen and Kurt Wolff Translator’s Prize in 2003. Dembo also worked as a translator for two feature documentary films, The Restless Conscience, which was nominated for an Academy Award, and The Burning Wall.

Peter Conrad was born in Australia, and since 1973 has taught English literature at Christ Church, Oxford. He has published nineteen books on a variety of subjects; among the best known are Modern Times, Modern Places; A Song of Love and Death; The Everyman History of English Literature; and studies of Alfred Hitchcock and Orson Welles. His most recent book is Creation: Artists, Gods and Origins. He has contributed features and reviews to many magazines and newspapers, including The New York Times, The New Yorker, The Observer, the New Statesman, The Guardian, and The Monthly.

Heinrich Böll (1917–1985) was one of Germany’s foremost post–World War II writers. He wrote short stories, essays, plays, and novels, the most famous of which are Billiards at Half-Past Nine, The Clown, Group Portrait with Lady, and The Lost Honor of Katharina Blum. Böll was awarded the Georg Büchner Prize in 1967 and the Nobel Prize in Literature in 1972.

“This novel, completed in 1942, is in my opinion the most beautiful Seghers has written. . . . I doubt that our post-1933 literature can point to many novels that have been written with such somnambulistic sureness and are almost flawless.” —Heinrich Böll

“Tranist belongs to those books that entered my life, and to which I continue to engage with in my writing, so much that I have to pick it up every couple years to see what has happened between me and it.” —Christa Wolf

“Transit is Seghers' best full-length novel. And Transit may be the greatest Exilroman ever…” —Dialog International

“Anna Seghers in Transit has painted a grim and crowded picture of Marseille when it was still a port of possible escape for the fugitives of all Europe…[Transit’s] very air of confusion and blind groping is consonant with its theme…it is credible and arresting…there is an amazing variety and reality in event the least of the characters.” —Christian Science Monitor

“No reader will question the author’s sincerity as she strives to anatomize the refugee mind.” —The New York Times Book Review

"What makes Miss Seghers's story so convincing is the human authenticity of her characters, and the masterly panorama of Vichy Marseille, that 'tiny spigot through which the world flood of Europe's fleeing thousands sought to pour.' Often as that heart-choking picture has been drawn before, both in factual reports and fiction, Miss Seghers's presentation will stir the reader's imagination to its depth." —The Saturday Review

"On its own, this story is an important untold story of the refugee situation in Second World War-era Europe, but in its own grappling with its allegorical nature, Segher transforms the book into a masterpiece. Seghers balances these two impulses in telling her story with an existential, theological layer. The situation of these refugees mimics the course of the human soul." —Joe Winkler, Vol 1. Brooklyn