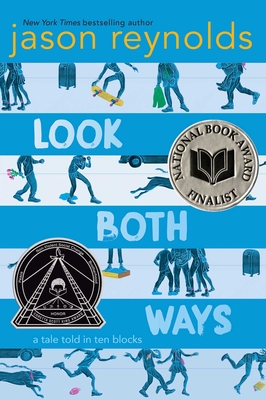 Look Both Ways: A Tale Told in Ten Blocks (Hardcover)

By Jason Reynolds, Alexander Nabaum (Illustrator)
$17.99
In Stock - Can be Ordered

“In Look Both Ways, Jason Reynolds shines a light on ordinary walks home and turns them into the extraordinary without the need of magic or faraway lands. Instead, Reynolds shows how worthwhile the people and neighborhoods around us are, especially when you take the time to know what’s happening in people’s lives. The stories in Look Both Ways are heartfelt, engaging, funny, thoughtful, and, though sad at times, full of hope.”
— Alison Perine, Hooray for Books!, Alexandria, VA

This story was going to begin like all the best stories. With a school bus falling from the sky. But no one saw it happen. They were all too busy—

Jason Reynolds conjures ten tales (one per block) about what happens after the dismissal bell rings, and brilliantly weaves them into one wickedly funny, piercingly poignant look at the detours we face on the walk home, and in life.

Jason Reynolds is a #1 New York Times bestselling author, a Newbery Award Honoree, a Printz Award Honoree, a two-time National Book Award finalist, a Kirkus Award winner, a two-time Walter Dean Myers Award winner, an NAACP Image Award Winner, and the recipient of multiple Coretta Scott King honors. Reynolds is also the 2020–2021 National Ambassador for Young People’s Literature. His many books include When I Was the Greatest, The Boy in the Black Suit, All American Boys (cowritten with Brendan Kiely), As Brave as You, For Every One, the Track series (Ghost, Patina, Sunny, and Lu), Look Both Ways, and Long Way Down, which received a Newbery Honor, a Printz Honor, and a Coretta Scott King Honor. He lives in Washington, DC. You can find his ramblings at JasonWritesBooks.com.

“One of the most exciting, constantly surprising voices in children’s literature…is back with another book that’s as innovative as it is emotionally arresting.”
— EW.com

"Reynolds' gift for capturing the voices and humanity of urban teens is on full display....Brims with humor, pathos, and the heroic struggle to grow up."
— Kirkus Reviews, starred review

"This is storytelling at its finest, a true masterpiece."
— Booklist, starred review

*Reynolds proves once again that he has a knack for marrying the emotionally gripping to the unabashedly silly in ways that read as both new and familiar....Charming."
— BCCB, starred review

*"The perfect book to hand to reluctant middle grade readers, who will relate to the hectic and uncertain lives of these characters."
— School Library Journal, starred review

*"Filled with the heart and humor."
— Horn Book, starred review

"An unconventional, clever exploration of the secret trials and tribulations of middle schoolers."
— Shelf Awareness