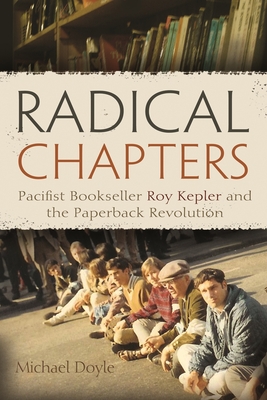 Long a hub for literary bohemians, countercultural musicians, and readers interested in a good browse, Kepler's Books and Magazines is one of the most influential independent bookstores in American history. When owner Roy Kepler opened the San Francisco Bay Area store in 1955, he led the way as a pioneer in the "paperback revolution." He popularized the once radical idea of selling affordable books in an intellectually bracing coffeehouse atmosphere.

Paperback selling was not the only revolution Kepler supported, however. In Radical Chapters, Doyle sheds light on Kepler's remarkable contributions to pacifism and social change. He highlights Kepler's achievements in advocating radical pacifism during World War II, antinuclear activism during the Cold War era, and antiwar activism during the Vietnam War. During those decades, Kepler played an integral role, creating a community and a space to exchange ideas for such notable figures as Jerry Garcia, Joan Baez, and Stewart Brand. Doyle's fascinating chronicle captures the man who inspired that community and offers a moving tribute to his legacy.

Michael Doyle is a reporter in the Washington, D.C. bureau of the McClatchy newspaper chain. He holds a master's degree in government from Johns Hopkins University and a master of studies in law from Yale Law School, where he was a Knight Journalism Fellow. He is the author of Forestport Breaks: A Nineteenth-century Conspiracy along the Black River Canal.