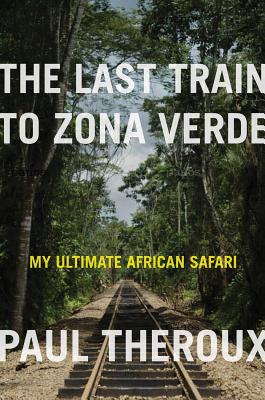 By Paul Theroux
Email or call for price
Out of Print

Following the success of the acclaimed Ghost Train to the Eastern Star and The Great Railway Bazaar, The Last Train to Zona Verde is an ode to the last African journey of the world's most celebrated travel writer.

“Happy again, back in the kingdom of light,” writes Paul Theroux as he sets out on a new journey through the continent he knows and loves best. Theroux first came to Africa as a twenty-two-year-old Peace Corps volunteer, and the pull of the vast land never left him. Now he returns, after fifty years on the road, to explore the little-traveled territory of western Africa and to take stock both of the place and of himself.

His odyssey takes him northward from Cape Town, through South Africa and Namibia, then on into Angola, wishing to head farther still until he reaches the end of the line. Journeying alone through the greenest continent, Theroux encounters a world increasingly removed from both the itineraries of tourists and the hopes of postcolonial independence movements. Leaving the Cape Town townships, traversing the Namibian bush, passing the browsing cattle of the great sunbaked heartland of the savanna, Theroux crosses “the Red Line” into a different Africa: “the improvised, slapped-together Africa of tumbled fences and cooking fires, of mud and thatch,” of heat and poverty, and of roadblocks, mobs, and anarchy. After 2,500 arduous miles, he comes to the end of his journey in more ways than one, a decision he chronicles with typically unsparing honesty in a chapter called “What Am I Doing Here?”

Vivid, witty, and beautifully evocative, The Last Train to Zona Verde is a fitting final African adventure from the writer whose gimlet eye and effortless prose have brought the world to generations of readers.

PAUL THEROUX is the author of many highly acclaimed books. His novels include The Lower River and The Mosquito Coast, and his renowned travel books include Ghost Train to the Eastern Star and Dark Star Safari. He lives in Hawaii and Cape Cod.

"Thoroughly engrossing—from Cape Town to Namibia to the Okavango Delta, Theroux is his inimitable, delightfully grouchy and incisive self…At times tragic, often comical and always gorgeously written, this is a paean to a continent, by a writer unafraid to give it some tough love." —Washington Post "He has no illusions about the fact that he is just a passing visitor (a privileged one at that), but that doesn't make his observations, or exquisite writing, any less engaging." —Entertainment Weekly (Best Book of the Year)

"Theroux is at his best when he tells their stories, happy and sad...Theroux’s great mission had always been to transport us beyond that reading chair, to challenge himself—and thus, to challenge us." —Boston Globe

"If this book is proof, age has not slowed Theroux or encouraged him to rest on his achievements…Gutsy, alert to Africa's struggles, its injustices and history." —San Francisco Chronicle"Everything is under scrutiny in Paul Theroux’s latest travel book—not just the people, landscapes and sociopolitical realities of the countries he visits, but his own motivations for going where he goes…His readers can only be grateful." —Seattle Times"A rich story often laced with irony, the work of a keen observer, full of colorful encounters…Ever the astute questioner, ever the curious reporter, ever a forthright witness to history and the dilemma of the oppressed, alert to political thuggery, he chronicles the crises facing the sub-Sahara." —New York Journal of Books"Theroux takes you on a rocky safari across infringed wilds, disenfranchised poverty and coven luxury. He introduces you to a boil of angry indigenous peoples and unsettled migrants you won’t meet on an itinerary tour....Go on, turn the first few pages. Then I dare you to put it down." —Charleston Post-Courier"As in the best of his many books, Theroux convincingly takes you along for every manic bus ride. His wonderment is yours, whether he’s contemplating eating a flyblown leg of chicken, dealing with a ferocious Angolan border guard, or deciding that this time, he’s had quite enough. It’s a remarkable, teeth-gritting tale" —Everett Potter"His ability to map new terrain, both interior and exterior, and to report from places that seldom make the news, remains undiminished." —Booklist ( starred review)"Theroux’s prose is as vividly descriptive and atmospheric as ever and, though a bit curmudgeonly, he’s still wide open to raw, painful interactions between his psyche and his surroundings." —Publishers Weekly (starred review)"In this intensely personal book, Theroux honestly confronts racism, stigma, privilege and expectations...Reading this enlightening book won’t only open a window into Theroux’s mind, it will also impart a deeper understanding of Africa and travel in general." —Kirkus  (starred review)