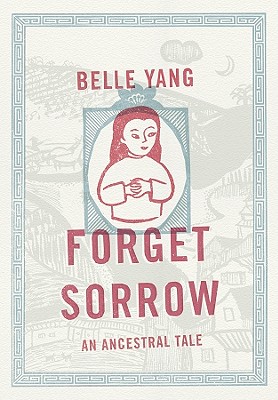 By Belle Yang
Email or call for price
Out of Print

Celebrated artist and writer Belle Yang makes a stunning debut as a graphic memoirist with this story of crisis and survival.

When Belle Yang was forced to take refuge in her parents’ home after an abusive boyfriend began stalking her, her father entertained her with stories of old China. The history she’d ignored while growing up became a source of comfort and inspiration, and narrowed the gap separating her—an independent, Chinese-American woman—from her Old World Chinese parents.

In Forget Sorrow, Yang makes her debut into the graphic form with the story of her father’s family, reunited under the House of Yang in Manchuria during the Second World War and struggling—both together and individually—to weather poverty, famine, and, later, Communist oppression. The parallels between Belle Yang’s journey of self-discovery and the lives and choices of her grandfather, his brothers, and their father (the Patriarch) speak powerfully of the conflicts between generations—and of possibilities for reconciliation.

Forget Sorrow demonstrates the power of storytelling and remembrance, as Belle—in telling this story—finds the strength to honor both her father and herself.

Belle Yang is the author of the popular illustrated books Hannah Is My Name, The Odyssey of a Manchurian, and Baba: A Return to China Upon My Father’s Shoulders. She lives in Carmel, California.

Starred Review. Occasionally playful yet profoundly moving . . . The narrative seamlessly shifts between present and past, and between America and China, mixing the intimacy of a memoir with the artist’s visual allusions to such sources as King Lear and The Scream. A transformational experience for author and reader alike.


Breathtakingly lyrical and poignant…Forget Sorrow is Yang’s first graphic novel—and as it turns out, it’s a world she inhabits like the most fluent of natives.

[A] riveting true-life tale of ancestral jealousies and familial woes from her father’s recollections of growing up in China…Yang’s story, which balances her own struggles with those of her ancestors without clumsily trying to equate them, echoes both with the tragic darkness of King Lear and the clean austerity of classical Chinese poetry.

There has been plenty of sorrow to forget, in both [Yang’s] ancestral history, and in her family’s California lives. Forget Sorrow relates those somewhat parallel stories with beauty and truth. It is an uplifting and moving story . . . Deeply touching.

A gem of a book. . . . Yang’s interweaving of her own travails with those of her grandfather in chaotic post-imperial China tugged at this cynical journalist’s heartstrings.
— Adam Najberg

[A] most unforgettable feast.
— Terry Hong

Bringing to life a story that spans multiple generations, governments, and continents, the comic-strip format feels more immediate than a biographical novel, realistic than a TV mini-series, and honest than a movie could ever be....uncommonly enriching.

Yang spins out the story in concentric eddies and whorls, an excellent reverberation of her black-ink style…This is an excellent book for those intrigued by family stories or by the history of twentieth-century China as well as anyone who likes memoirs made more dynamic by incorporating more than just the writer’s perspective on events.
— Francisca Goldsmith

Heart-wrenching, but Yang’s exorcistic storytelling is ultimately about learning to move forward.

In wonderfully dreamy—and often nightmarish—black-and-white images rendered in pen and ink, Yang dips in and out of her ancestors’ past, her kindly father narrating the story. The ravages of famine and the brutality of the Cultural Revolution’s unthinking minions are hauntingly depicted…but the reader also beholds selfless acts of compassion. It is these moments, along with Yang’s tender portrayal of a natural world at peace…that lend her story its ultimate, life-affirming grace.
— John McMurtie

Yang brings her own bold brushstroke drawing to the fore to convey the period’s characters and locations…The real revelations here are…her family’s survival through tumultuous change, as bonds and ties are stretched sometimes to breaking point… [and] the miracle of Yang herself as she eventually regains her freedom and confidence and chooses the comics medium to express her redemptive journey so evocatively.
— Paul Gravett

I have long been a fan of Belle Yang’s art and writing, and Forget Sorrow is a wonderful display of her prodigious talents. I am moved by her honesty and humor, mesmerized by the amazing history of her family. While her story is deeply personal, it is also magical, nearly mythic. It reminds us that we all have unknown family histories, which, once revealed, can become the parables that change us profoundly.

— Amy Tan, author of The Joy Luck Club and The Hundred Secret Senses

In Belle Yang we have our Isaac Bashevis Singer and Marc Chagall—all in one bright new talent.
— Maxine Hong Kingston, author of The Woman Warrior

With drawings that remind me of van Gogh’s sketches, Yang tells a heartfelt interwoven story of family and finding oneself.
— Ariel Schrag, author of Potential and Likewise

Forget Sorrow is intimate and yet grand in scope. Through Belle Yang’s expert weaving of personal memoir and family history, we emerge with new understanding of pre-Communist China, ancestral lore, and father-daughter reconciliation. Yang’s drawings—and her heartfelt dialogue—make these long-ago stories feel both present and personal. A compelling addition to the comics memoir form.

— Josh Neufeld, writer/illustrator of A.D.: New Orleans After the Deluge