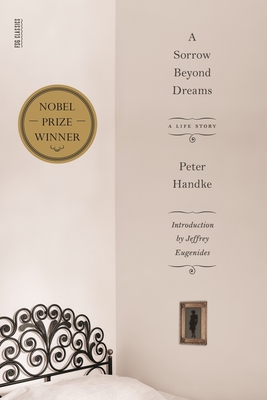 A Sorrow Beyond Dreams: A Life Story (FSG Classics) (Paperback)

By Peter Handke, Ralph Manheim (Translated by), Jeffrey Eugenides (Introduction by)
$14.00
In Stock In Store

"The Sunday edition of the Kärntner Volkszeitung carried the following item under ‘Local News': ‘In the village of A. (G. township), a housewife, aged 51, committed suicide on Friday night by taking an overdose of sleeping pills.'"

So opens A Sorrow Beyond Dreams, Handke's reckoning with his mother's life--which spanned the rise of the Nazis, World War II, and postwar suffering--and death. Both stark and lyrical, full of love, anger, admiration, and a keen sense of history, this slim book reveals Handke at his most lucid and direct. It is the most moving and accessible work in his distinguished career; it is "indispensable" (Bill Marx, The Boston Globe).

Peter Handke was born in Griffen, Austria, in 1942. A novelist, playwright, and translator, he is the author of such acclaimed works as The Moravian Night, A Sorrow Beyond Dreams, The Goalie's Anxiety at the Penalty Kick, and Repetition. The recipient of multiple literary awards, including the Franz Kafka Prize and the International Ibsen Award, Handke is also a filmmaker. He wrote and directed adaptations of his novels The Left-Handed Woman and Absence, and co-wrote the screenplays for Wim Wenders’ Wrong Movie and Wings of Desire. He won the Nobel Prize for Literature in 2019.

Ralph Manheim (b. New York, 1907) was an American translator of German and French literature. His translating career began with a translation of Mein Kempf in which Manheim set out to reproduce Hitler's idiosyncratic, often grammatically aberrant style. In collaboration with John Willett, Manheim translated the works of Bertolt Brecht. The Pen/Ralph Manheim Medal for translation, inaugurated in his name, is a major lifetime achievement award in the field of translation. He himself won its predecessor, the PEN translation prize, in 1964. Manheim died in Cambridge in 1992. He was 85.

Jeffrey Eugenides was born in Detroit and attended Brown and Stanford Universities. His first novel, The Virgin Suicides, was published by FSG to great acclaim in 1993, and he has received numerous awards for his work. In 2003, he received the Pulitzer Prize for his novel Middlesex (FSG, 2002), which was also a finalist for the National Book Critics Circle Award, the International IMPAC Dublin Literary Award, and France’s Prix Médicis. The Marriage Plot (FSG, 2011) was a finalist for the National Book Critics Circle Award, and won both the Prix Fitzgerald and the Madame Figaro Literary Prize. His collection of short stories, Fresh Complaint, is from FSG (2017). Eugenides is a professor of creative writing in the Lewis Center for the Arts at Princeton.

“A Sorrow Beyond Dreams is Handke's masterpiece, a short, concentrated, mysteriously exhaustive portrait of his mother, from whom history and circumstance have removed most traces of an identity.” —J. S. Marcus , The New York Review of Books

“In A Sorrow Beyond Dreams, the author confronts his mother's suicide in a compelling story that is ‘like an explanation of a recurrent dream, a dream so vividly expressed it becomes our dream.'” —Chicago Sun-Times