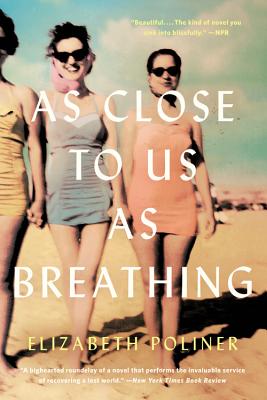 As Close to Us as Breathing: A Novel (Paperback)

Beautifully written historical novel. From the very first sentence, this multigenerational Jewish family story narrated by Molly, the daughter of one of the three Syrkin sisters, Ada, Vivie and Bec, had me spellbound. It’s about a single tragedy that changed the lives of everyone in the family, and obligation imposed by strong family traditions and expectations. Ultimately, it’s about how family ties can shatter and shelter us, at the same time. --Aggie

A multigenerational family saga about the long-lasting reverberations of one tragic summer by "a wonderful talent [who] should be read widely" (Edward P. Jones).

In 1948, a small stretch of the Woodmont, Connecticut shoreline, affectionately named "Bagel Beach," has long been a summer destination for Jewish families. Here sisters Ada, Vivie, and Bec assemble at their beloved family cottage, with children in tow and weekend-only husbands who arrive each Friday in time for the Sabbath meal.

During the weekdays, freedom reigns. Ada, the family beauty, relaxes and grows more playful, unimpeded by her rule-driven, religious husband. Vivie, once terribly wronged by her sister, is now the family diplomat and an increasingly inventive chef. Unmarried Bec finds herself forced to choose between the family-centric life she's always known and a passion-filled life with the married man with whom she's had a secret years-long affair.

But when a terrible accident occurs on the sisters' watch, a summer of hope and self-discovery transforms into a lifetime of atonement and loss for members of this close-knit clan. Seen through the eyes of Molly, who was twelve years old when she witnessed the accident, this is the story of a tragedy and its aftermath, of expanding lives painfully collapsed. Can Molly, decades after the event, draw from her aunt Bec's hard-won wisdom and free herself from the burden that destroyed so many others?

Elizabeth Poliner is a masterful storyteller, a brilliant observer of human nature, and in As Close to Us as Breathing she has created an unforgettable meditation on grief, guilt, and the boundaries of identity and love.

Elizabeth Poliner is the author of Mutual Life & Casualty, a novel-in-stories, and the forthcoming collection of poems, What You Know in Your Hands. Her stories and poems have appeared in The Kenyon Review, Colorado Review, The Southern Review, Prairie Schooner, and many other journals. A recipient of seven individual artist grants from the D.C. Commission on the Arts and Humanities, she has also been awarded fiction scholarships to the Bread Loaf and Sewanee writers' conferences. She teaches creative writing at Hollins University.

"Vivid, complex, and beautifully written, Elizabeth Poliner's novel, As Close to Us as Breathing, brims with characters who leave an indelible impression on the mind and heart. This moving story of the way one unforgettable family struggles with love and loss shows an uncommon depth of human understanding. Elizabeth Poliner is a wonderful talent and she should be read widely, and again and again." —Edward P. Jones, Pulitzer Prize-winning author of The Known World

"Poliner depicts each character with sensitivity and insight...Beautifully written, stringently unsentimental, and yet tender in its empathy for the perennial human conflict between service and self."—Kirkus (Starred Review)

"Poliner's novel is an exquisitely written investigation of grief and atonement, and an elegy for a Jewish family bound together by tradition and tribe."—Publishers Weekly

"Beautiful.... A nuanced, intricate family drama that explores their tight culture at a turning point.... [It's] the kind of novel you sink into blissfully. It casts a spell.... [Poliner's] characters seem so real, so multi-dimensional, so sympathetic even when they mess up that you have to shake yourself back to the present each time you put down the book.... As Close to Us As Breathing is a marvel of artful storytelling."—NPR.org

"Resonant, sensitively observed...Poliner has a keen eye for the awkwardness and sudden leaping insights of adolescents on the brink of adulthood....Poliner also deserves kudos for the warm, particularized light in which she dresses her many characters. As Close to Us as Breathing is a big-hearted roundelay of a novel that, among other things, performs the invaluable service of recovering a lost world."—New York Times Book Review


"If summer, for you, recalls days spent by the seashore, Poliner's saga of three Jewish sisters and the beachfront cottage they share with their families--until life-altering tragedy strikes--will enthrall you."
—O, the Oprah Magazine


"An instant classic.... Poliner handles the texture of Jewish family life with brilliance, authenticity, and a touch of wistfulness."
—Jewish Book Council